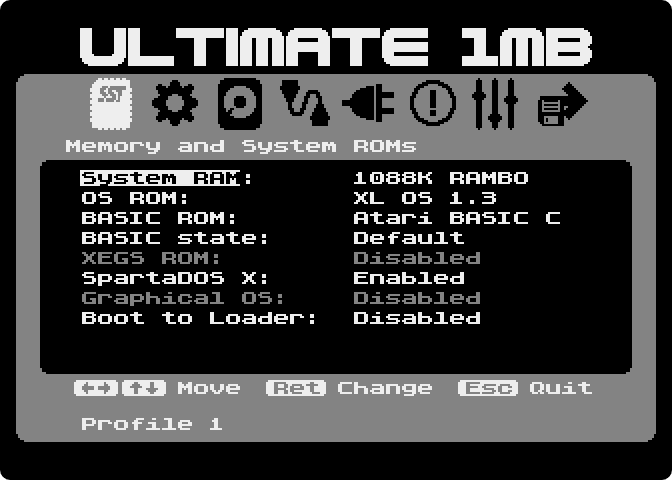 In 2012, Sebastian Bartkowicz (Candle) asked me to write a PBI BIOS to for Ultimate 1MB. During the months that followed, Candle thought of more and more things to add (such as the ability to read and write disk images mounted in the FAT partition of the CF card), and after weeks of coding and debugging, I had produced something approaching a final version.

In 2015, a desire to significantly broaden the functionality of Ultimate 1MB and overcome some of the limitations of the PBI BIOS led me to completely re-write the firmware and produce a new main BIOS, PBI BIOS and XEX loader.

The Ultimate 1MB firmware update can be applied by running UFLASH.XEX and flashing the 64KB FIRMWARE.ROM file to the ‘Firmware’ slot. One should also update SpartaDOS X using the customised version provided, which includes the latest hard disk tools on the CAR: volume. Alternatively, one may re-flash the entire ROM with one of the 512KB images provided, which include a useful selection of BASIC and OS ROMs (highly recommended when upgrading from the original firmware).

Note: Owing to a redesign of the configuration layout, all configuration profiles will be reset to default values upon applying this update.

If wish to report any issues with the new firmware of have any suggestions on how it might be improved, you may email me directly via the address on the contact page, or post in the discussion thread on the AtariAge Forum.

Please lend your support to Lotharek at lotharek.pl. Thanks to him, Ultimate 1MB and other excellent Atari 8-bit upgrades are always available for convenient online purchase.

Purchase Ultimate 1MB with my firmware pre-installed from lotharek.pl