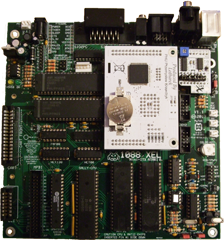 In January 2017, Michael St Pierre (mytek) embarked on the project he’d been contemplating for two years: a completely redesigned Atari 8-bit motherboard, with an Mini-ITX form factor and using the original VLSI chips. After only nine months of gestation, the fully debugged version 1.1 boards arrived.

From the outset, the 1088XEL was built around the TK-II, Mousetari, UAV and Ultimate 1MB. Having already seen and used my alternative Ultimate 1MB firmware, Michael soon invited me to become involved in the 1088XEL testing process and asked if I could customise the BIOS in order to support the new motherboard’s unique features. Of course, the new firmware’s plug-in architecture made the creation of a drop-in 1088XEL module easy, although as time went on, a few modifications to the base code were also made.

Eventually, customised versions of the U1MB main BIOS, PBI BIOS and XEX loader were developed for the 1088XEL. Some changes – such as support for dual physical disks (used with the XEL-CF adapter) – proved highly challenging, but by the close of 2017, the new firmware was taking shape, although bug fixing and further development of the 1088XEL continued until April 2018. As the firmware neared completion. the task of updating the user manual and technical documentation began. By the beginning of June 2018, everything was finally completed.

In July 2018, Michael tabled the idea of another new Atari 8-bit motherboard, this time to be housed in a 1050 disk drive case. The result was the 1088XLD.

The 1088XEL and 1088XLD share almost identical Ultimate 1MB firmware, aside from the branding of the main BIOS. You should download the firmware which corresponds to your hardware.

Note: Owing to a complete redesign of the configuration layout, all profiles will be reset to default values after this update is applied.

To learn more about the 1088XEL and 1088XLD projects, please visit the 1088XEL home page and the 1088XLD home page, where you’ll find links to schematics, Gerbers, PIC firmware, and documentation.

As well as the 1088XEL and XEL-CF, Michael offers many other interesting projects at AtariBits.

If you’d like to purchase 1088XEL in ready-built or kit form, you can find ordering instructions at The Brewing Academy.